The number of participants in the demonstration does not matter. What matters is the renewed willingness of so many Egyptians, regardless of the hundreds of preventive arrests made by the police in recent days, to revive the spirit of the revolution that began on Jan. 25, 2011, against another dictator, Hosni Mubarak 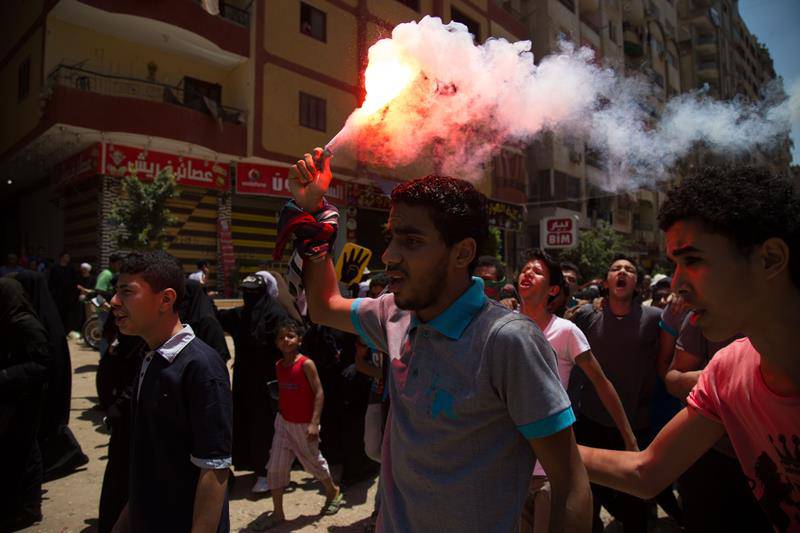 There’s still a part of Egypt that demands freedom, rights and dignity — as opposed to the sell-off of the country, symbolized by the sale of the Tiran and Sanafir islands to the Saudi petromonarchy. This Egypt, which President-dictator Abdel Fattah el-Sisi describes as an “evil power,” stood up to the thousands of police and soldiers deployed by the regime to crush protests in Cairo on Monday.

The number of participants in the demonstration does not matter. What matters is the renewed willingness of so many Egyptians, regardless of the hundreds of preventive arrests made by the police in recent days, to revive the spirit of the revolution that began on Jan. 25, 2011, against another dictator, Hosni Mubarak. The regime, Sudarsan Raghavan wrote three days ago in The Washington Post, now wants to remove the Tahrir Square revolution from school books, as if it never took place, as well as the massacre of pro-Muslim Brotherhood demonstrators three years ago in Cairo.

The chronicle of Monday’s events is a long list of marches, sometimes of a few dozen people, dispersed by force with tear gas, arrests and raids throughout the Egyptian capital. The major incidents were concentrated in the Giza district and Dokki, where Giulio Regeni lived. The reporter Basma Mostafa was arrested near Tahrir Square and then released. She had interviewed, on behalf of the Dot Masr news site, the families of some of the Egyptians, alleged members of a criminal gang, killed by the police and then accused in the ridiculous official version of being responsible for the kidnapping and murder of the young Italian researcher.

The Reuters news agency reported April 21 that Regeni was probably taken into police custody on Jan. 25, the night he disappeared. The Egyptian authorities reacted to the story accusing Reuters of publishing “false news that disturbs Egypt’s public order and reputation.” Reuters has defended the work of its reporters and denied that the head of its Cairo bureau, Michael Georgy, left Egypt to avoid arrest. In recent days an anchor of a television channel close to the regime, Al Hadath Al Youm, said Regeni could “go to hell” and said the outcry over his assassination was nothing more than an international conspiracy against Egypt.

Besides Mostafa, other journalists were detained: Mohamed El Sawi, Hisham Mohammad (al Watan), and the French Efa Sheef, Sam Forey, Etienne Bouy and Jenna Le Bras released late in the afternoon along with a Danish and a Hungarian reporter. The BBC correspondent, Orla Guerin, said on her Twitter account that she and her team were stopped by the police near Tahrir Square.

An unknown number of activists were arrested after a raid on the Dokki headquarters of the El Karama Party (Nasserist) led by Hamdin Sabbahi, a leftist candidate in the last presidential elections. The police also closed the offices of several professional associations for the day and appointed dozens of agents to the headquarters of the journalists’ union, the historical reference point for many events, where they performed arrests throughout the area. In the evening, the police did not allow a union board member, Khaled al Balshy, to meet with the detained Egyptian journalists.

It must also be highlighted that the socialist leader Haytham Mohamadein was arrested Saturday. On Monday, just before dawn, the director of the board of the Egyptian Commission for Rights and Freedoms, Ahmed Abdallah, was taken. His organization had documented the disappearance of hundreds of Egyptians in all probability detained in the regime’s prisons. On Sunday, a student at the American University in Cairo, Ibrahim Tamer, was arrested. He is known for his opposition to the Sisi regime.

The largest protests took place in the Mesaha square, in the governorate of Giza, where hundreds of people gathered and chanted slogans against the regime and the sale of Tiran and Sanafir islands to Saudi Arabia. They also called for the release of all Egyptians arrested over the weekend. The police intervened violently when protesters moved to Dokki street, throwing tear gas and firing small-caliber bullets. In those moments, security forces helicopters flew over Cairo in warning. The demonstrations continued on Mansoura, Zagazig and other locations. The activist Zeyad Salem reported that on Monday at least 161 people were arrested, mostly in Dokki. According to other sources, the total was higher.