Once aligned with Armed Forces generals during the June 30 movement, today leaders of independent trade unions lament their lost agency and worry over forthcoming legislation and the general deterioration of workers’ conditions 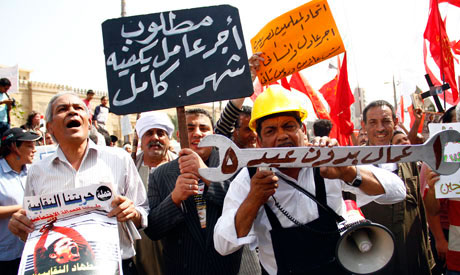 Rather, the 2013 uprising and the events surrounding it engendered a polarization within Egypt’s labor movement marked by several organizational schisms.

Shortly after Morsi was deposed in July 2013, Egyptian Federation of Independent Trade Unions (EFITU) leader Kamal Abu Eita was appointed to the position of manpower minister in the first Cabinet following the military’s ascension to power. Abu Eita was quick to issue a statement calling for a moratorium on any industrial action during the transitional period. “Workers who were champions of the strike under the bygone regime should now become champions of production,” said Abu Eita, at the time.

Leaders of the labor union movement, state-controlled unions and independent unions signed declarations “to halt strikes and all other formers of labor protests” until the election of a president and Parliament, while, at the same time, the government was introducing new austerity measures. In an interview in September 2013, Abu Eita stated, “I’m optimistic following this great revolution, which is a continuation of the revolution of July 23, 1952. I trust it will realize the objectives of bread, freedom and social justice.”

Despite the labor unions’ efforts to control workers, strikes and other industrial actions steadily increased from mid-2013 to 2016. There were 1,117 labor protests reported across Egypt in 2015 and a 25 percent increase in the reported rate of strikes and protests during the first four months of 2016. Even as workers moved against labor leadership’s efforts to suppress industrial action, the strikes do indicate the limited extent of the gains leadership made by aligning with the post-June 30 state.

However, in May 2016, Abu Eita sounded far less optimistic when speaking at a labor conference in the city of Mahalla, where he referenced organized attacks and campaigns against independent unions carried out by the state-controlled Egyptian Trade Union Federation (ETUF) and the Ministry of Manpower, the latter of which has been returned to ETUF control. At the conference, Abu Eita warned of the ETUF and Manpower Ministry’s combined threat to outlaw independent unions.

“If they outlaw independent unions, then secretive labor unions will emerge, and this will not be in anybody’s favor, as basic labor politics would thus be pushed underground and rendered clandestine,” he said.

The Supreme Constitutional Court is currently presiding over a court case against Egypt’s independent unions, filed by the ETUF which has called for their dissolution. But what made the independent labor unions movement align with the Armed Forces’ quest to oust the Muslim Brotherhood in the first place?

Hoda Kamel, an independent union organizer, quit the EFITU in 2014 and is currently a leading member of the Towards a Just Labor Law Campaign. In her view, the EFITU wasn’t moved necessarily by patriotism – a contrast, she argues, to how participants in the June 30 movements are usually portrayed. Rather, she attributed labor unions’ support to the fact that many leaders within the independent unions have relations with the security apparatus, and others were looking to secure personal gains by courting the military. “They made use of the lack of expertise and awareness of most of workers to spread the regime’s propaganda,” says Kamel.

“We took part in the protests of June 30 with the hopes of realizing social justice,” says Kamal al-Fayoumi, a worker leader who was sacked from his job at the Misr Spinning and Weaving Company in Mahalla in 2015. “After we got rid of the traders of religion [the Muslim Brotherhood], we returned to the previous traders that had existed under [former President Hosni] Mubarak. We hoped, as we did during January 25, 2011, for the revolutionary demands of bread, freedom, and social justice – yet none of these demands has been realized,” he says.

“Instead what we realized was that dozens of independent unionists, worker activists, and labor organizers were being sacked from their jobs, simply because they spoke out for their rights or stood up against corruption in their workplaces,” he adds.

Former Minister of Manpower Ahmed Hassan al-Borai who was appointed minister of social solidarity in July 2013, pointed to several setbacks in labor rights, including the decision to return control of the Ministry of Manpower to the highly contentious state-controlled ETUF, a move that allowed it to dominate the trade union movement at the expense of independent unions. “Until now the government has not been able to provide a minimum wage for those employed in the private sector, and there is still no law to replace outdated Trade Union Law 35/1976, despite our many different efforts to do so,” says Borai.

Kamel also speaks of being worried about upcoming legislation that she judges to be worse than existing laws, such as a new labor law, the trade unions law, the civil service law and the health and social insurance law. She expresses concern for the Egyptian working class’s deteriorating living standards, along with the devaluation of the Egyptian Pound, and the increasing cost of living. “How can I have hope for the future when I see civilian workers standing trial before a military court because they peacefully requested their rights?” she asks.

“Since June 30, 2013, we had hoped that independent unions would be able to defend the rights of the working class,” she says, adding that, while the EFITU failed to live up to her expectations, the other independent federation, the Egyptian Democratic Labor Congress, was still struggling for labor rights.

However, the vehemence with which many workers supported the June 30 regime has not completely shattered. Sayyed Habib, a retired worker from the Mahalla-based, state-owned textiles company, expresses an entirely different sentiment. “I have remained optimistic from the revolution of June 30, 2013 until June 30 of this year, and I will continue to remain optimistic as long as new and just laws are issued to replace the old labor legislation which is still in effect,” he says.

In the presidential election of 2014, Habib proudly voted for Abdel Fattah al-Sisi, the man who effectively put an end to the Muslim Brotherhood regime following the June 30 protests. To this day, Habib has not found cause to criticize Sisi’s presidency.

He recognizes that there are violations of labor rights, especially perpetrated by company administrators and members of the state-controlled federation, but he still believes that Egypt’s independent trade union movement, and the labor movement in general, will be able to remedy these violations.