EGYPT. Head to head: One year of Morsi versus one year of Al-Sisi

The past 12 months have encompassed many unprecedented events, including a presidential campaign by Al-Sisi, who won an election which has been widely viewed as farcical and illegitimate 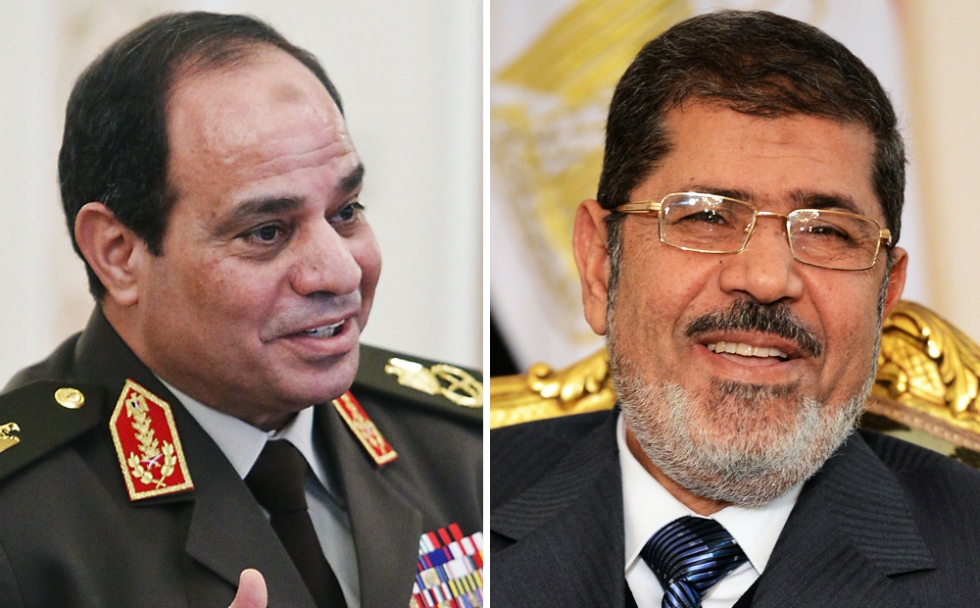 Egypt – A year ago, on July 3, 2013, we witnessed the overthrow of Egypt’s first democratically-elected civilian president and the first president since the January 25 revolution. The overthrow of Dr Mohamed Morsi came after just one year of his presidential term in a coup led by his Minister of Defence, Abdel Fatah Al-Sisi. It is timely to compare Morsi’s one year in power with Al-Sisi’s one year in power. The past 12 months have encompassed many unprecedented events, including a presidential campaign by Al-Sisi, who won an election which has been widely viewed as farcical and illegitimate.

Comparing the ideas and policies of the coup leader, as a candidate for president upon whom many had pinned their hopes to solve Egypt’s problems, with those of the deposed president, illustrates the enormous differences in vision and outlook between the two men.

During his presidential campaign, Al-Sisi was asked about some of the main issues facing Egyptians. Regarding the reoccurring electricity shortages, Al-Sisi’s big idea was that every citizen should replace their light-bulbs into energy-saving bulbs and reduce their use of electrical appliances. When Morsi was asked the same question during his presidential campaign in 2012, which he titled the “Renaissance Project”, he said he intended to use nuclear power to fill this deficit. Nuclear energy, he explained, would be used for electricity production. This would also create a surplus of energy which could be exported, increasing Egypt’s national income.

Many Egyptians cannot even afford to buy bread and queue to buy government-subsidised bread. Al-Sisi’s answer to this problem was that he would ask Egyptian families to sacrifice from the amount they eat and save just one piece of bread. “If 25 million families save a piece of bread by having three-quarters of a piece instead of a whole slice, there would be 25 million pieces of bread for those that do not have any,” he argued.

Morsi, on the other hand, saw that increasing the production of wheat was the way to solve this serious problem; he suggested renting land in Sudan or Ethiopia for cultivation in order to save water. His plan was for Egypt to be self-sufficient in wheat within four years.

Regarding the shortage of foreign currency reserves (as a result of the dearth of tourists and foreign investors), Al-Sisi suggested that every Egyptian living abroad should donate $10 a month to Egypt. Morsi’s solution was to increase the fee for all foreign ships passing through the Suez Canal.

With unemployment standing at 13.4 per cent of nearly 90 million Egyptians, Al-Sisi suggested buying a thousand carts for the youth to sell vegetables. For Dr Morsi, unemployment could be tackled by establishing micro-projects, such as assembling computers and televisions, and larger-scale projects such as the Suez Canal development project and other labour-intensive schemes. The Suez Canal project alone, according to Morsi, would not only increase national income but also provide up to a million jobs.

When Al-Sisi was asked for his position on the Camp David Treaty with Israel, he said that he will safeguard the agreement and will co-ordinate with Israel to protect the borders. When Dr Morsi was asked about his position, he stressed that Egypt is a country which maintains its international obligations providing other parties also keep to their commitments; it is impossible for “five million people anywhere to scare 90 million,” he said.

The substantial disparity in outlook and vision of both men is evident from their handling of these issues. Whilst Al-Sisi seeks to administer a sticking-plaster to Egypt’s economic wounds, Morsi’s vision sought to cure the problems at their core and provide long-term solutions. “We have to produce our food, we have to produce our medicines, and we have to produce our weapons,” he insisted. Al-Sisi’s economic policy was hard to pinpoint during his presidential campaign, because he did not have one.

So who are the two men and what was their life before entering Egyptian politics? Mohammed Mohammed Morsi Issa El-Ayaat was born in 1951; he obtained his bachelor’s and master’s degrees in Engineering at Cairo University before going to the US to complete a doctorate at Southern California University, which he completed in 1982. After completing his education, Morsi lectured in two American universities before returning to his homeland where he was appointed Professor and Dean of the School of Engineering in Al-Zaqaziq University.

Parallel to his academic career, Morsi partook in political life through the Muslim Brotherhood where he became the official parliamentary spokesman for the group after he won a parliamentary seat in the 2000 elections. He was chosen universally as the best parliamentary man for 2000-2005. In 2011, Morsi became the head of the Freedom and Justice Party (FJP), the political arm of the Brotherhood, and was elected as a member of the Egyptian parliament in 2012; he resigned from the movement and the FJP after he won the presidential election in the same year.

Abdel Fatah Saeed Hussein Khaleel Al-Sisi, born in 1954, served in the infantry following his graduation from the Military Academy in 1977. He studied at the Wartime Military College in the US in 2006, and was appointed Egypt’s military attaché to the Kingdom of Saudi Arabia. Despite not being involved in any actual battles, Al-Sisi was promoted within the military and held several important positions, including leadership of the infantry and the Northern Command in Alexandria. He was the head of intelligence warfare before he was selected by Morsi for the position of defence minister. Al-Sisi was generally unknown to the public until his appointment as a minister in August 2012.

Morsi’s victory in the 2012 presidential election was a victory for the January 25 Revolution and for democracy. The revolution was famous for the unity it created among the Egyptian people, and his winning of five consecutive votes was an indication that they were united in selecting who they wanted to lead them. This year’s elections came on the back of the bloody coup which has taken the lives of over 8,000 people and seen more than 44,000 men, women and children imprisoned for their opposition to the military takeover and the annihilation of the revolution.

Moreover, whilst the 2012 elections were open for participation by all, with thirteen presidential candidates, the 2014 elections saw one puppet opponent for Al-Sisi. He won, of course, in a stark reminder of the previous six decades of authoritarian rule, with a landslide 96 per cent of the votes. Indeed, various pro-coup anti-Brotherhood parties refused to celebrate the first anniversary of the 30 June “Revolution”, such as the 6th April movement and the Salafi Noor Party, in protest at the exclusion of parties from the 2014 elections and the divisions that Egypt has seen since that historic day last year.

Morsi grew in popularity when he entered the public arena, appealing to Egyptians with his humble nature. Following his election, President Morsi remained in his rented home and insisted on a modest salary of $1,650 a month. He met with members of the public frequently and prayed alongside them in the mosques. When he addressed the people in Tahrir Square following his victory, and whenever he mingled with the crowds, he refused to have bodyguards as a barrier between him and his people. From the time that he first appeared in the public eye, including his presidential campaign, Al-Sisi has not made a single public appearance, fearing for his life despite his supposed popularity with Egyptians,

Al-Sisi has limited himself to carefully choreographed interviews and indoor meetings with handpicked groups. He kept his election platform secret for most of the campaign on the grounds of “national security”. His supposed popularity was propelled and fuelled by Egyptian state television alone, which compared him with former Egyptian President Nasser and made a hero-saviour cult-figure out of him. This “Sisi-fever” continued despite the embarrassment that emanated from the campaign and the military’s allegedly “complete cure device” for HIV and Hepatitis C. The media was quick to induce amnesia in his supporters after these embarrassments by filling the screens with their demonisation of opponents and magnifying their Egyptian Superman, Al-Sisi.

The past 365 days under Al-Sisi have seen the breakdown of many human rights in Egypt. The sanctity of human life was squandered with 8,000 killed and 20,000 injured, with the media and even some Islamic scholars belonging to the regime, advocating and encouraging such bloodshed. Egypt has also seen the abolition of freedoms and rights with 44,000 political prisoners incarcerated in jails, including 48 journalists, and hundreds issued with death sentences in recent months.

Since the coup, Egypt has seen the closure of television channels and newspapers and the arrest of journalists and students. The country is now among 48 countries worldwide that do not enjoy any freedoms and, according to Freedom House, is regarded as a country which lacks media freedom and freedom of expression; political participation; civilian control and security-sector reform; peaceful assembly and civic activism; and judicial independence and rule of law. Egypt is back to being a police state and the military has full control over all state institutions.

During Morsi’s time in office, despite the 30 protests that occurred, there was not a single fatality. The law prohibiting the arrest of those expressing opinions was cancelled and there was no longer any such thing as political prisoners. The number of tourists increased during Morsi’s rule, with Egypt receiving almost seven million tourists in the first half of 2013, injecting $5 million into the economy. Following the coup and before the August massacres, tourism went down by 30 per cent, and went down to zero following the bloodshed in Cairo. When Morsi became president, foreign oil reserves had reached $14 million following the interim post-revolution military rule; that figure went up to $18.8 million. Shortly after the coup, oil reserves fell to 14.9 million; in one month alone, it fell by $3.9 million.

Morsi met with many world leaders, both at home and abroad. He attended the African Union summit where he was welcomed with great respect and was seated on the front row. Two days after the military coup in 2013 the Peace and Security Council of the African Union suspended Egypt’s membership. It was readmitted reluctantly following Al-Sisi’s presidential “victory”, although Sam Akaki, the Director of Democratic Institutions for Poverty Reduction in Africa, has called for the withdrawal this readmission, citing Al-Sisi’s long list of human right abuses. During the recent African Summit, Egypt’s Al-Sisi was seated in the third row.

History will be the judge

For Egyptians, the economy, security and personal freedoms are the key issues of concern. The past year has seen a culling of these freedoms, to a level never before seen in Egyptian history.

With Egyptians now fasting the holy month of Ramadan, many are facing severe difficulties in being able to feed their family with the increased prices of food and the continuous electricity cuts in Egypt’s harsh summer heat. Indeed, Ramadan entered Egypt forlornly this year, with new laws and restrictions to dictate even the spiritual aspect of the people. Hundreds of mosques are closed; ID cards are requested for entry into those that are open; and the nightly Ramadan prayers (taraweeh) are cut short. State television is doing its best to distract the people with 30 new drama series this Ramadan, but will the Egyptian people wake from their intoxication and look at what Egypt has become, and then join the “opposition”? Time will tell.

President Morsi may not have been perfect and he may have made mistakes, but it was unreasonable to expect the country to get back on its feet in just one year after 60 years of authoritarian rule. After reviewing the “achievements” of the past year under Al-Sisi, can anyone honestly say they still support the coup? Nena News