Washington and its Arab allies have launched air strikes on IS targets in Syria. But the coalition remains as divided as ever about what to do next. Salah Nasrawi reports. 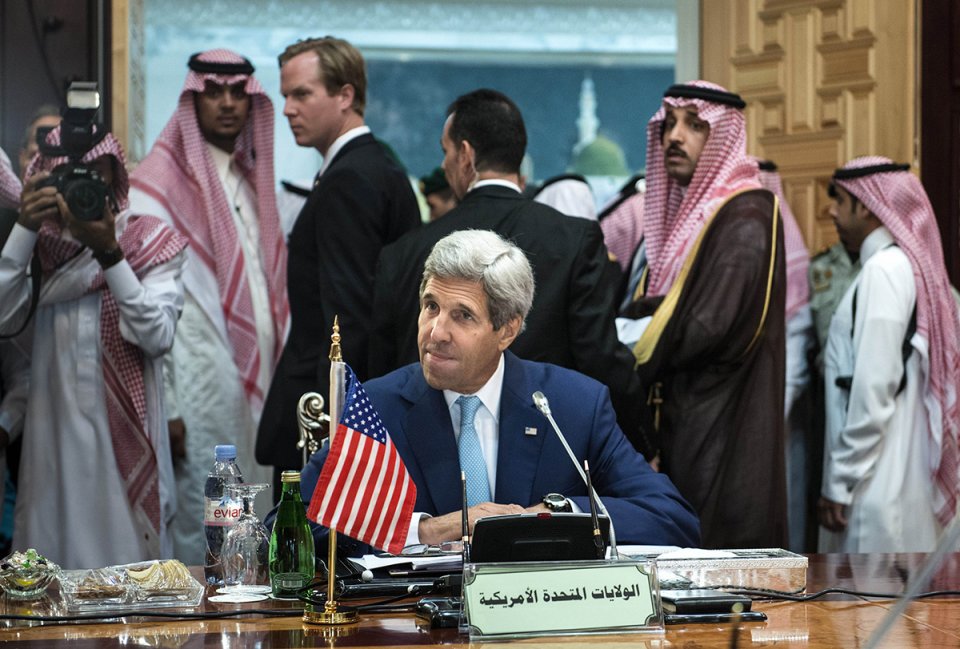 The United States has expanded its air strikes against the Islamic State (IS) in Iraq and is now taking the offensive into neighbouring Syria, using cruise missiles, drones and warplanes. But as the US-led international coalition to fight IS takes shape, differences are emerging between Iraq’s feuding factions over the effectiveness of Washington’s strategy to defeat a group that controls large swathes of territories in northern and western Iraq. The mood among Iraq’s neighbours is anything but celebratory.

Whether this signals a major shift in the US-led war against IS or is merely a symbolic action on the part of the Arab nations involved remains to be seen. Washington has declared its intention to build a long-term “holistic, global campaign that is committed and capable of degrading and destroying” the terrorist group. But its bid to involve Iraqi and Arab partners has exposed fault-lines in the putative international alliance.

Political and sectarian factions in Iraq are deeply divided over US involvement. Iraq’s Kurds, desperately seeking international support for their independence drive, have welcomed the US-led coalition, while the country’s Shia and Sunnis are far from sanguine about Washington’s new adventure in Iraq.

Shia leader Muqtada Al-Sadr has warned the government against cooperating with the Americans, whom he describes as “occupiers.” His powerful Sadrist Movement held a huge demonstration on Saturday to protest against further US involvement in Iraq. Grand Ayatollah Ali Al-Sistani, Iraq’s most senior Shia cleric, has warned that the “external assistance” offered by Washington could become a prelude “to breaching Iraq’s independence.” “Cooperation with the international effort must not be taken as a pretext for the imposing of foreign decisions on Iraq, especially when it comes to military events,” one of Al-Sistani’s representatives said on Friday.

Suspicions are rife among Iraqi Shia that the US sowed the seeds of IS and is now using the fear the group has created as a pretext to turn Iraq into a testing ground for its Middle East policies. Al-Sadr has explicitly accused the CIA of fostering the extremist group. The Shia-led government — officially, at least — welcomes the growing international effort to battle IS, though it has stressed that Iraq sees no need for other nations to send troops.

Haidar Al-Abadi, Iraq’s new prime minister, and Ibrahim Al-Jaafari, his foreign minister, say help in fighting IS should be restricted to military, economic and financial assistance to the Iraqi government. At the same time, they insist that international efforts to combat extremists in Syria be expanded.

Washington’s strategy in Iraq involves creating a paramilitary Sunni force — the National Guard — similar to the Awakening Councils that it set up to fight Al-Qaeda during its occupation of the country. Washington believes the new National Guard will give Sunnis autonomy in policing their provinces.

Several factors are shaping the Sunni response to US policy in Iraq. From the Sunni mainstream’s perspective, there are two reasons why the US intervention might be welcomed: to find a way out of the ordeal of IS control of their provinces, and to end what they perceive as their persecution by the Shia-led government.

Yet many Sunnis view the Awakening Councils as a failure and see the dramatic expansion of IS into their provinces as a useful tool in their fight against the Shia-led government. On Monday, Ali Hatem Al-Soleiman, a prominent Sunni tribal leader in Anbar province, said tribes will not turn their backs on IS until the Baghdad government complies with Sunni demands.

The Baghdad government has signalled its intention to establish National Guards in Shia provinces. If established, the new force will create yet another potential flash point in Iraq’s lingering sectarian conflict.

Beyond Iraq’s borders, the conflicting agendas and interests of Iraq’s neighbours make any regional agreement on a broad strategy for stability and development in Iraq nearly impossible. Iran, a key player in Iraq and a powerful ally of its Shia-led government, rejects the US coalition. Ayatollah Ali Khamenei has accused Washington of seeking a “pretext” to interfere militarily in Iraq “without authorisation”. Iran’s foreign minister, Mohamed Javad Zarif, blasted the alliance as “based on American constituencies rather than what’s best for the people of Iraq and the region.”

Tehran’s main concern is that the alliance against IS will come at the expense of its Shia allies in Iraq and the Allawite regime of Bashar Al-Assad in Syria, and halt Iran’s growing regional influence. During the latest round of talks with US Secretary of State John Kerry in New York this week, Zarif made it clear that Iran is willing to work with the US and the coalition it set up against IS, but not before its demands for nuclear flexibility are met.

Turkey, Iraq’s powerful northern neighbour and a NATO member, has shunned US-led efforts to fight IS. Ankara declined to sign a communiqué calling for a military campaign against IS, and has refused to contribute to the international alliance against the group or allow the US to use Turkish air bases for military operations.

Turkey’s Prime Minister Recep Tayyip Erdogan has warned of the risks of launching air strikes against IS in Iraq. Ankara appears more interested in securing its strategic interests in Iraq, and strengthening its position against Iran in the battle for regional hegemony, than in confronting IS. This week, IS attacks forced tens of thousands of Syrian Kurds to flee their villages in what amounts to ethnic cleaning. The move came amid reports that Turkey is mulling the prospect of establishing a buffer zone along its border with Syria and Iraq.

Turkey has been accused of tacitly supporting IS by turning a blind eye to recruiting, allowing its territory to be used by jihadists for passage into Iraq and Syria, and facilitating the export of oil from IS-held territory in Syria and Iraq. This week’s release of Turkish hostages held by IS was mediated via the group’s Iraqi Sunni allies — including Baathists and tribal leaders — based in Turkey.

Saudi Arabia’s position is also ambivalent. The Sunni powerhouse has made no clear commitment to help Iraq’s Shia-led government, though it could easily weaken IS by shutting off the flow of money to jihadists in Iraq and Syria and stopping Saudis from joining the terrorist group. For Saudi Arabia, along with other Sunni Gulf states, the coalition is less about IS than regional realignment and confronting rising Shia influence. They also see the coalition as a potentially useful tool to help end Syria’s Allawite regime.

In his address to the Security Council on Friday, Saudi Ambassador Abdallah Al-Mouallimi put the blame for the rise of IS squarely on the shoulders of Damascus. “Both represent exclusion and sectarianism,” he said.

Jordan, meanwhile, is pursuing a cautious policy towards its turbulent eastern neighbour. On Monday, King Abdullah II blamed the expansion of IS on the hesitation of the US and the international community to take action against the extremist group earlier. Jordan’s Foreign Minister Nasser Jawda told the Security Council that the IS crisis is being fuelled by the floundering of an “inconclusive political process in Iraq and Syria,” a reference to the perceived exclusion of Sunnis by the Shia-led government in Iraq and by Al-Assad’s Allawite regime in Syria.

In July, Jordan hosted a meeting of Iraqi Sunni leaders and militia commanders who called the jihadist-led insurgency sweeping parts of Iraq a “popular revolt.” Jordan is reported to be planning a second meeting of tribal Sunni leaders in Amman. Like Iraq’s other Sunni neighbours, Jordan, whose monarch coined the term “the Shia Crescent”, is deeply suspicions of Baghdad’s Shia-led government.

Cairo, too, has reservations over the US-led alliance, though President Abdel-Fattah Al-Sisi was quoted on Saturday as saying he is prepared to give whatever support is needed in the fight against IS. Egyptian officials have repeatedly argued that IS is but one component of a wider problem and that a comprehensive strategy is needed to tackle the threat posed by the whole range of radical Islamist groups.

After weeks of intensive US coalition-building in the Middle East, the joint attacks on IS targets in Syria by the US, Bahrain, Qatar, Saudi Arabia, Jordan and the United Arab Emirates represent a noticeable success for the Obama administration. They came a day after Samantha Power, the US Ambassador to the UN, and Martin Dempsey, chairman of the US Joint Chiefs of Staff, publicly expressed their frustration with the hesitation of Iraq’s neighbours to help out militarily with the anti-IS campaign.

But there is no hiding the fact that it is a coalition of not-so-willing partners. And with so many conflicting agendas, there are no guarantees that a long-term, comprehensive anti-terror strategy will emerge.