Can Saudi Economic Cities be the answer to Riyadh’s dependence on oil?

The six cities wanted by the late King Abdullah are tasked to open up the Kingdom’s economy, while making it less dependent on oil revenues. But after an early enthusiastic moment, an increased public spending coupled with the plummeting crude prices rise analysts’ scepticism 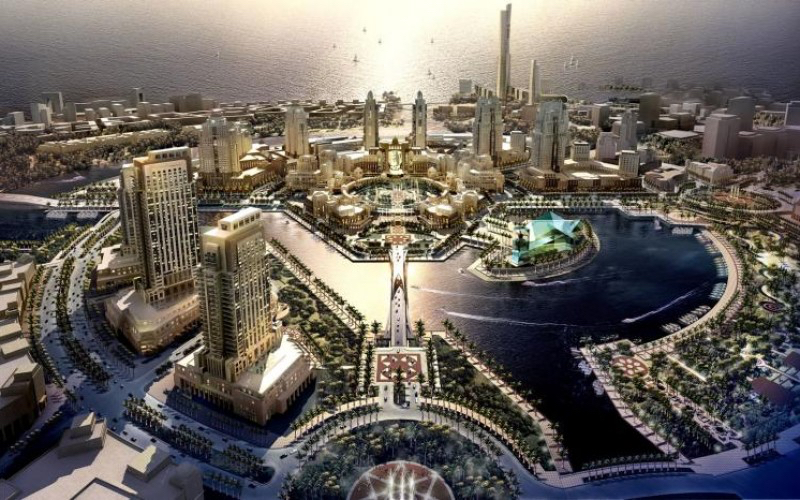 Rome, February 15th, 2016, Nena News – Contrary to what their names and future functioning may suggest, KAEC, PABMEC, KEC and JEC aren’t stock companies. The four acronyms – where EC is for Economic Cities – are indeed part of an ambitious urban and territorial plan, which was announced by King Abdullah bin Abdulaziz al-Saud back in 2005: six new cities to cope with the Kingdom’s major demographic and economic challenges. Among them, the King Abdullah Economic City (KAEC) – heart of the entire project and wannabe 2 million people metropolis – is preparing to become the main commercial port of the Red Sea, while rivalling Dubai for the title of touristic and financial capital of the Middle East. Yet, with oil prices further decreasing, some are reasonably wondering whether the $ 100 billions project wouldn’t impact Riyadh’s barely unbearable public spending.

Saudi Arabia – OPEC’s most influent member and owner of the 18 percent of the global reserves – is the first oil exporter in the world; a business contributing to the 80 percent of its total revenues with a value of $ 130 billions in 2015. For roughly eighty years, oil revenues – which turned the country’s rural economy into one of the first economic world powers over the 1930s’ – allowed al-Saud dynasty to mould a unique economic architecture. Where public subsidies and extensive social assistance programs provided the country with stability and wealth, relieving citizens from the burden of taxation.

However, although US estimates confirm that Saudi reserves would not drain before the next seventy years, Riyadh’s complete dependence on the oil sector – and inevitably on its market fluctuations –,accompanied by major concerns over the fact that an increased domestic consumption may turn the country into an oil-importer by 2030, forces the Saudi Kingdom to undertake a massive and substantial economic restructuration. In order to both diversify its sources of revenue and become less dependent on the oil curse. In this context, the collapse of crude prices makes such a necessity just more urgent; while the recent announce that shares of the Aramco may be opened to private investors confirms the on-going reforms’huge reach.

Within this framework, not only do the Economic Cities represent an ambitious program of urban and territorial development, but they also – and more importantly – are the means through which Riyadh hopes to diversify its economy, restructure a less and less sustainable public expenditure and foster private investment from abroad. As confirmed by an official document by SAGIA – Saudi Arabia General Investment Authority  – the new Economic Cities will turn out as extremely advantageous centres for private activities, where investors will completely owns and account for real estate properties, in exchange for minimum taxation.

In other words – and this mainly concerns the King Abdullah Economic City – in reproducing Dubai and Singapore’s model, Riyadh aims to realize its own paradise for private investments. Where sandy beaches and luxurious resorts stretches under the shadow of a glittering financial district;and the biggest port of the Red Sea is directly linked to an ‘Industrial labour village’. While everything is framed in the promise of ‘sustainable’ urban development and more relaxed social norms; at least more relaxed than what the state-sponsored Wahhabism imposes on the rest of the Kingdom.

In doing so, although it is still unclear how King Abdullah Economic City will concretely function, it is highly probable that – if the project will ever succeed – KAEC will become a special statute area; where laws will be issued by an extraordinary authority – the Economic Cities Authority, already established by Royal Decree – and a CEO, rather than a mayor, will be entitled to enforce them. How such a structure will eventually impact everything transcending KAEC’s economic life remains still unclear.

Moreover, if the controversial relationship between economic liberalisation and liberalisation of rights still features as one of the cities’ main challenges – possibly increasing the risk that foreign capitals will keep on preferring the more ‘open-minded’ Doha, Dubai or Beirut – these wannabe metropolis’ economic potential is not obvious at all. Back in 2006, the opening of the huge worksite on the Red Sea – north of Jeddah – met the Saudi investors’ greater enthusiasm, with roughly 10 millions of applications for a value of $ 1,87 billions. Today, ten years later, KAEC – the only city to be properly developed – only hosts 5,000 people, and mainly involved in construction, in spite of the 2 million population originally expected by 2025. And while foreign investments considerably slowed down due to the financial crisis (2008), many sections of the Master Plan are still covered of sand.

To this regard, as rightly observed by many analysts, although Fahd al-Rasheed – responsible for the whole project – keeps on stressing that KAEC is being entirely owned, financed and developed by private actors, the latter’s success depends also on Riyadh’s capacity to guarantee cheap energy. A capacity now seriously hindered by plummeting oil prices and a folly public expenditure; which already had to reduce public subsidies in order to face the cost of war in Yemen.

According to the Saudi government, KAEC and the other Economic Citiesare the answer to the country’s major challenges: economic diversification, independence from the oil market, development of a private sector, housing problems and unemployment. Yet, while KAEC’s official website portraits the future metropolis as a model of economic, social and environmental sustainability – a symbol of the new Kingdom -, it is reasonably questionable whether Riyadh will be able to sustain such a development up to that moment. Nena News

You can find the Italian version of this article here