By entering into an agreement with the Nusra Front in Idlib, Ankara is seeking to interpret the Astana agreement to serve its own war with the Kurds, says Nasser Sharara 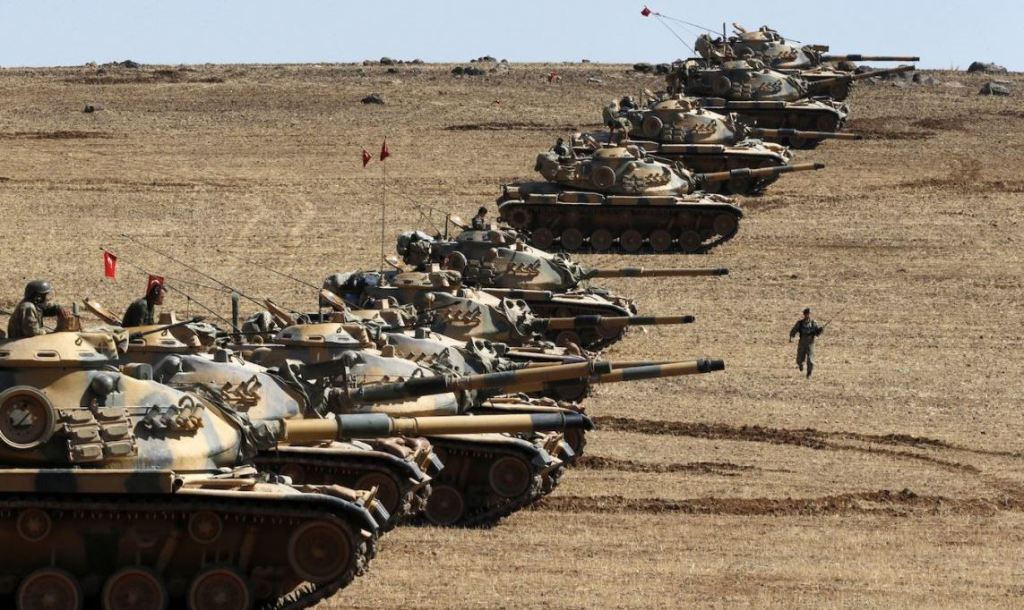 The Turkish military operation that was launched towards Idlib a few days ago has raised questions regarding its basic aims and the political cover that it enjoys. In principle, and according to the Astana-6 statements, this operation is meant to be in implementation of Turkey’s mission according to the agreement reached between Ankara, Moscow, and Tehran. This agreement calls for the establishment of a fourth de-escalation zone, this time in Idlib Governorate, whose implementation will be guaranteed by Iran, Turkey, and Russia. Damascus, however, views the current Turkish Idlib operation as an occupation, and has denied that it is part of the Astana-6 understandings.

It is worth noting that neither Iran nor Moscow both of which – in addition to Turkey – are guarantors of the fourth de-escalation zone, has yet said anything denying or confirming the Syrian claim.

This suggests that the Astana-6 agreement on the Idlib de-escalation zone was nothing more than a ‘preliminary understanding’ between the three countries regarding launching the process to establish these zones, but without any firm agreement on the zone’s final or even medium-term purpose.

Only 72 hours after Turkish military action began, the three guarantor states divergent respective priorities started to emerge. Thus, in its action within the context of the de-escalation zone, Turkey is giving priority to its concerns in ‘Afrin regarding the PYD (Syrian Kurdish Democratic Union Party), rather than Idlib or the Nusra Front’s presence there.

Moscow’s main priority is to strike at the Tahrir ash-Sham Organization – i.e. the Nusra Front – and to prevent any attempt bring together an army of moderate opposition groups in Idlib that would serve as an alternative to the Syrian army. In fact, during the Astana-6 meeting, the head of the Russian delegation threatened that his country would not accept the creation of an army of moderate opposition groups in Idlib. He was referring to a project that Ankara had secretly discussed with certain factions in Northern Syria, according to which Turkey’s entry into Syria – backed by Iranian and Russian cover and as part of the settlement to establish de-escalation zones – would be used to establish a united opposition army commanded by rebel General Mohammad al-Hajj Ali, and with a general staff of around 40 former Syrian army officers, most of whom are residing in Turkey.

For its part Iran’s agenda lies somewhere between its accord with Turkey over confronting the Kurdish threat, and its understanding with Russia over preventing the opposition from massing in Northern Syria and its emergence as a moderate successor to the Nusra and the regime in this area.

Turkey’s main aim is to initiate a course that allows it to barter its every step inside the fourth de-escalation zone against extracting demands from its two guarantor ‘sisters’ relating to its national security. In other words, it wants to transform the fourth de-escalation zone into a launching-pad for deals, but without the involvement of the U.S. that backs the Kurds. In doing so, it hopes to create a tradeoff between its strategic interests and those of Iran and Russia in Northern Syria.

That is a privilege that Washington did not allow it to enjoy via Ankara’s participation in the destruction of ISIS in Eastern Syria, or even in Northern Syria when it prevented Turkish forces from reaching Manbij as part of the Euphrates Shield operation. Moreover, Moscow denied it that same privilege when it blocked the Euphrates Shield from reaching ‘Afrin, where the PYD is present under the protection of Russian forces.

Turkey’s most important goal in the fourth de-escalation zone is to make use of Russian and Iranian cover in order to complete the Euphrates Shield operation, which failed to achieve its major purpose a year ago. It goal then was to expel the PYD from Manbij, ‘Afrin, and seven villages in ‘Afrin’s environs, which would have undermined the establishment of a Kurdish region and prevented that region’s geographical constituents from linking up with each other. At the time, Moscow and Washington’s opposition prevented Turkey from reaching these areas, which subsequently forced it to launch an alternative operation to which it gave the name ‘Euphrates Sword,’ but that failed for the same reasons.

The most serious conclusion that Turkey – as well as its two ‘guarantor sisters’ – reached from the very first moment that the fourth de-escalation zone was established, was that each side is trying test the other side’s intentions. The first test that Turkey was subjected to was when the Nusra Front fired an RPG rocket-propelled grenade at the vanguard of its advancing forces into the Syrian interior.

Turkish intelligence dealt with this incident as a political ambush that was meant to ensure that its military operation would be forced to into an armed clash with the Tahrir ash-Sham Organization from the very beginning – something that Ankara wants to avoid, and Moscow wants badly.

Ankara responded by holding urgent contacts that resulted in a meeting the town of Dar ‘Azza between Turkish intelligence and the Tahrir ash-Sham Organization, under the latter’s protection, and which contained the clash with Turkish troops and arrested its Egyptian member who had fired the rocket-propelled grenade at the Turkish force.

No information has been leaked about what took place at this meeting. But informed sources have told al-Jumhouriyya that it is likely to have resulted in an agreement according to which the Nusra Front would not confront the Turkish army when it enters Idlib because this would be in both sides’ interest.

For one thing, this would neutralize the Russian air force, which would have no pretext to carry out air raids in the Idlib area based on confronting the Nusra’s opposition to the creation of the fourth de-escalation zone in the Governorate. This, in turn, would spare Idlib from the kind of destruction meted out to Raqqa and Deir az-Zour.

It would also open the door for a resolution of the issue of the Nusra members; one that Turkey would later pursue after it consolidates its hold over Idlib city and a 40-kilomer-wide border strip inside Syria. The strip would be intended to deny the Kurds the possibility of linking together their two cantons in ‘Ain al-‘Arab and Tal-Abyad, and also to prevent these two cantons from opening a land corridor for their planned entity, leading to the Mediterranean.

It is worth noting that a few days after the Dar ‘Azza meeting, members of the Tahrir ash-Sham Organization accompanied Turkish military reconnaissance forces to Mount ‘Issa, which overlooks ‘Afrin, the PYD’s stronghold that runs parallel to the Turks’ line of deployment in the Idlib area.

This indicates that the Dar ‘Azza meeting was followed by practical steps, suggesting that it has led to an agreement between the two parties on the future of the Idlib de-escalation zone. Nena News