The war between the armed factions classified as moderate on the one hand, all of which fall under the Turkish umbrella, and the Syrian government on the other may be approaching its end. That will only pave the way for the outbreak of a possibly fiercer war among these factions, writes Abdelbari Atwan 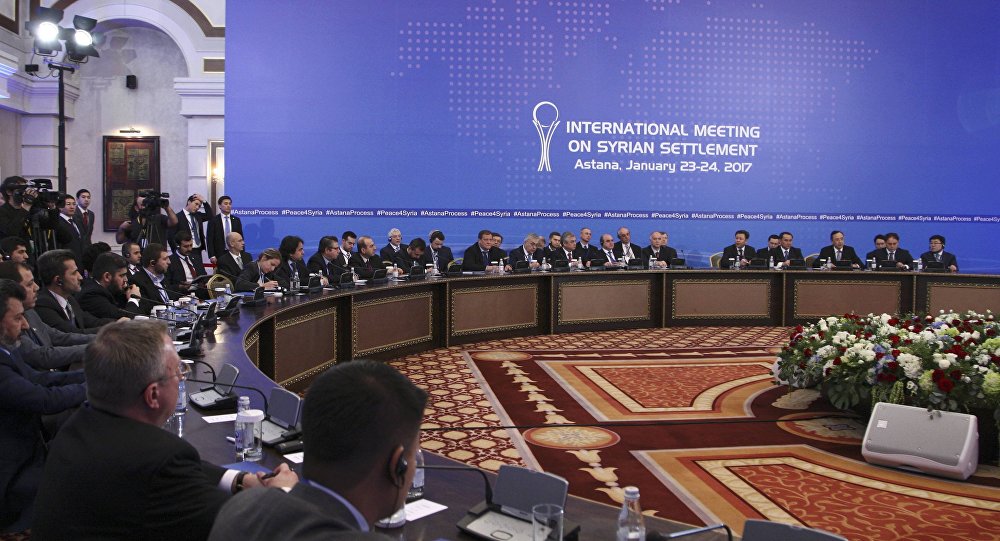 The Astana conference ended with a first direct meeting between the Syrian government delegation on the one side, and the armed opposition’s delegation on the other. True that the meeting was a silent one, and that the conference concluded with a final statement signed only by the three states guaranteeing the ceasefire agreement – Russia, Turkey and Iran. But it did break the ice and lay the foundations for a new phase at whose threshold the Syrian crisis now stands.

The most important and prominent points to be gleaned from the conference’s proceedings and the statements by the officials taking part, and that every observer and analysts should take into consideration, may be summarized as follows:

– First, the conference began as a bilateral move and as the implementation of a Russian/Turkish agreement; but it ended as a trilateral agreement that includes Iran as a major guarantor of the ceasefire and its implementation. Meanwhile, all Arab parties, as well as Europe and the U.S., have been excluded. And we have in mind here two states [Saudi Arabia and Qatar] that have played a major role in backing the armed Syrian opposition financially and with weapons. The coming days will reveal exactly how and why this exclusion came about.

– Third, Russia has turned from a state occupying Syria and a major source support for the Syrian government, into a ‘neutral mediator’ that is a guarantor of the ceasefire and a political solution – so much so that the head of the opposition negotiation delegation and the leader of Jayshul Islam, Mr. Mohammad ‘Alloush, spoke ‘warmly’ of Russia and praised his meetings with its delegation, expressing his trust in it.

– Fourth, the head of the Russian delegation to the Astana conference, Alexander Lavrentiev announced that Moscow has handed the armed opposition factions a proposed draft constitution for Syria. This is the constitution that was reportedly supervised by a group of Russian experts. We do not know if the official Syrian delegation has also received a copy, what its reaction to it may be, and what constitutes its main points.

In light of the above four points, one can say that the Astana conference has achieved a major ‘breakthrough.’ A new image of the Syrian scene has emerged, specifying the main players on the Syrian side (the government and the armed opposition), and on the regional side (Turkey and Iran), along with Russia as a superpower sponsor. The conference has also united all the guarantors and participants in a single front, despite the disagreements between them, in a confrontation with a ‘common enemy,’ namely, the hard-line Islamic groups.

The war between the armed factions classified as moderate on the one hand, all of which fall under the Turkish umbrella, and the Syrian government on the other may be approaching its end. That will only pave the way for the outbreak of a possibly fiercer war among these factions – ISIS and the Nusra Front (renamed as the Fateh ash-Sham Front).’

It is not unlikely that the Arab and international parties that were marginalized and excluded from the Astana ‘dish’ will attempt to foil it by providing direct or indirect support for the other factions that will continue to be targeted, or those factions – Kurdish or Islamist – that include thousands of fighters under their banner. And they will do so in response to the attempt to exclude and marginalize them, and to adopt agendas that conflict with these parties’ original goals by strengthening the Iranian role and basing any political solution for the crisis on Syrian President Bashar al-Assad and his government remaining in power.

Mr. Bashar al-Ja’fari, the head of the Syrian government delegation, made an important statement was at his press conference at the end of the Astana talks. He said: ‘We are waiting for the armed opposition to join the Syrian Arab Army in fighting the Nusra and ISIS.’ We should pause and consider his words because they summarize the true aim behind the Astana conference and draw a map of future action–at least in our view.

There is a famous Damascene proverb that best captures the U-turn that has already occurred and is that developing in the positions of all parties, beginning with the government, moving on to the Turks, and ending with the armed opposition. It says: ‘The first step in a dance is unnatural and affected.’ When Mr. Ja’fari sits face-to-face with Mr. ‘Alloush at the same table and under the same ceiling, it is wise not to exclude any potential development the coming days and weeks, including the possibility that the armed opposition forces may join the fight against the factions classified as terrorist under the Syrian army’s wing.

The sharp exchanges between Mr. Ja’fari and Mr. ‘Alloush can be classified as ‘appetizers’ or ‘hors d’oeuvres’ that precede the main course. Such things are customary in negotiations.

The negotiations have returned to ‘square-one’ –i.e. between the regime and the opposition inside Syria, whether the latter is peaceful or military. As for the opposition in exile, there seems to be an agreement that they should be gradually removed from the negotiating scene, or on turning their role and that of the countries backing into a merely consultative one.